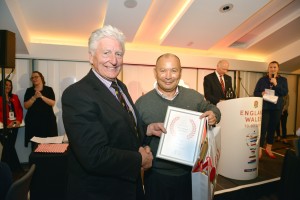 The former Moseley and North Midlands centre was voted North Midlands Volunteer of the Year last year for his outstanding contribution to Ludlow over many years in numerous volunteer roles including president.

Acton was nominated by North Midlands for one of the RFU President’s awards and was surprised to receive it from Jones who had just guided England to a hard-fought win.

“It all far exceeded expectations and, to get our awards presented by Eddie at the dinner was very special,” Acton said.

Acton was accompanied by his wife Ann and North Midlands president Rob Bray and RFU Council Members Steve Guy and Paul Kaminski were also present to see him honoured for his services to rugby at Ludlow and in Shropshire and North Midlands.