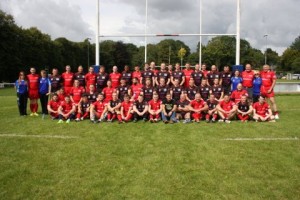 BROMSGROVE are awaiting confirmation from Guinness World Records whether they have set a new record for the world’s longest ever rugby match.

Two teams from the National Three Midlands club played for 26 hours non-stop over the August Bank Holiday weekend which, subject to verification, beat the previous record by an hour and eight minutes.

Bromsgrove have now submitted a video of the match to Guinness World Records who will make a final ruling on whether a new record has been established.

The event at Finstall Park was also used by Bromsgrove as a fund-raiser for Scotty’s Little Soldiers, a charity which supports the children of men and women from the armed forces who are killed on active service.

Bromsgrove have so far raised £20,000 for the charity and they will host a fund-raising ball at Finstall Park in September. Further details can be obtained from: jason.woodbine@barrattplc.co.uk