Scotland rugby union great Doddie Weir was honoured with the Helen Rollason Award at the BBC Sports Personality of the Year show on Sunday.

The following year, he launched his charity, the My Name’5 Doddie Foundation, which seeks to aid research into the disease and improve the lives of those with MND.

“Thank you very much for this most amazing award,” he said. “It’s lovely to have my family and the rugby boys here. This is the closest I’ve ever got to a trophy so it’s very nice! What a great Christmas present this has been and to raise awareness of MND.

“From playing sport, I’ve got a bit of spirit and fight and my spirit is to find a cure for MND. My foundation has raised nearly £5m, the recognition and support has been staggering.

“Sport has taught me to enjoy myself because you don’t know what’s next so tonight will be pretty special.”

He was presented with his award by the Princess Royal. Speaking to Weir, Her Royal Highness said: “You’ve given a lot of pleasure and pride over the years of your playing for Scotland, and we’re very grateful of that.

“I know what a difference you have made to the understanding of MND, its impact and your ability to fund research. For that, we’re all extremely grateful.

“It’s a personal pleasure to give you the Helen Rollason Award.” 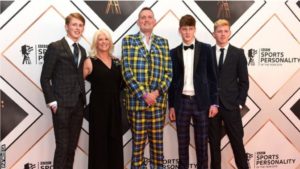 Scotland second row Weir also represented the British and Irish Lions on their 1997 South Africa tour, and was famously described as being “on the charge like a mad giraffe” by commentator Bill McLaren.

In July 2019, he received an OBE from the Queen for services to rugby and to charity.

“To come to terms with his own life-changing diagnosis and channel his energy into raising more than £4m to research the condition and a possible cure is nothing short of extraordinary.”

The Helen Rollason Award recognises outstanding achievement in the face of adversity and was introduced to the show in 1999 in memory of the BBC Sport journalist and presenter, who died of cancer that year at the age of 43.

As you will be aware the My Name’5 Doddie Foundation is NMRFU Centenary Season chosen charity, so why not  organise some fundraising within your club: