Droitwich booked their place in the RFU Intermediate Cup final by holding out for a 24-22 victory over York in a gripping semi-final at the Glyn Mitchell Memorial Ground today.
Droitwich will now meet Camberley, who beat Coney Hill 20-17 in the other semi-final, in the final on May 6 in what will be a second visit to Twickenham in 12 months.

Last season Droitwich were beaten by Farnham in the RFU Senior Vase final. Having won promotion to Midlands Two West (South) they were elevated to the RFU Intermediate Cup this season and booked their place in the national semi-finals by beating Whitchurch to win the Midlands Intermediate Cup two weeks ago.

“My intention this year was to bring the side up and finish mid-table. I had drawn up a three-year plan. The idea was a top four finish in the second year and then to target it again in the third year,” said Droitwich director of rugby Adam Drew.

“I don’t think anyone could have envisaged Droitwich making it this far, winning the league and the Midlands final and going back to Twickenham in a higher competition. It’s a great achievement for everyone involved with the club.

“Last year we went to enjoy the occasion, this year we are going there to win it.

“Days like these bring the town and the local community together. It’s great for Droitwich and the game of rugby of course.

“We’ve done it with homegrown talent. Sixteen of today’s squad have come through the minis and juniors and we have brought a couple of people back to the club who had left because they weren’t getting the quality of rugby here.

“But you don’t get to win these competitions or get to this level just by having just one person. It’s a team effort and that was shown today by the quality of the game.”

There was little to choose between the sides in a tense semi-final played on a gluepot pitch after recent heavy rain.

York, the North champions, had the edge in the line-outs and they rumbled over for an early converted try which gave them an eighth minute lead.

Droitwich reduced the deficit midway through the first half when they put right wing Brad Cook over on the overlap for an unconverted try before York full-back Jon Davies slotted a penalty.

But Droitwich equalised on the stroke of half-time when a period of sustained pressure eventually wore down York’s defence and number eight Phil Horton ploughed over for another unconverted try.

Droitwich made their attacks count when first player/coach Pete Knight then scrum-half Josh Skinner went over from close range with Cook converting both.

But Droitwich failed to turn further pressure into the points and it was York who hit back with a converted try eight minutes from try which set up a nailbiting finale. 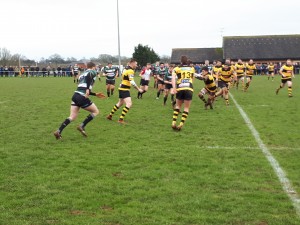