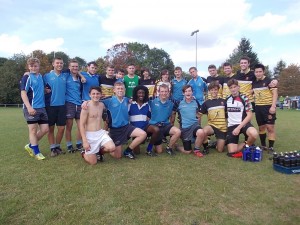 Local rivals Droitwich and Redditch have joined forced to form a combined Under-17 team.

Both clubs had faced the prospect of their Under-17 teams folding because of declining playing numbers so Droitwich coaches Pete Wall and Mark Thomas and their Redditch counterparts Jamie Southwell and David Bush decided to form one joint team to offer regular rugby.

The two clubs are only nine miles apart so holding joint training sessions were not a problem. Permission was also granted for the combined side to enter the North Midlands Under-17 League.

The combined side began their campaign with a 24-22 win over Bromsgrove in their first-ever match, a result that delighted Bush.

“Players from both Redditch and Droitwich linked up, playing some impressive spells and running some great set plays, especially considering they had only teamed up an hour before the game started,” Bush said.

“All the coaches are sure the combined R & D side will be a side to challenge the best in the area. Beating Bromsgrove has to be the best start to our joint season.”

The combined team will fulfil Redditch’s league fixtures and Droitwich’s Cup draws for the remainder of this season.

“After a difficult start to the Under-17s season it is great to now have enough lads together to field a side of 15 plus again. Hopefully this will enable more boys to remain in the game,” Thomas said.

“It also ensures that the investment made by both clubs in this age group will be realised as they can now remain in the game without transferring to another club.”