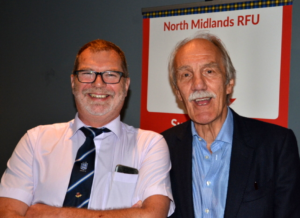 What Andy did not know was that he was there for the announcement of the “Journey to Japan” competition. Andy, from Erdington RFC, has been recognised for the ongoing commitment to grassroots rugby with a Journey to Japan, courtesy of Mitsubishi Motors in the UK. As part of the award he was able to select someone to travel with him – Graham Rhodes will also be traveling

They will be joined by two highly dedicated and selfless rugby volunteers from across the country, the three have each earned a spot on the automotive company’s Journey to Japan initiative, which is sending grassroots rugby volunteers on a special week-long trip to Japan from 31st October to 6th November.

The three winners were selected through an application and interview process, where they outlined what they have achieved in the past 36 months, their ambitions for the next 24 months and how the programme would drive their work further.  This was filmed please click on the link – Road to Japan – Andy Trueman

“To have our work at Erdington RFC recognised by the RFU and Mitsubishi Motors in this way is fantastic.  There may only be two of us going, but the award is recognition of the efforts of many at the club, who over the last 3 years since we restarted have given their time and their shared enthusiasm to getting us to where we now are.

Watching the Japanese performances in the tournament should be an inspiration for everyone at all levels of rugby and show what can be achieved when you harness the power of team work. This is at the heart of Japanese culture, which we are very much looking forward to sampling and hopefully bringing back some ideas to our own club!”

Many congratulations to Andy and we are sure he is going to have the trip of his lifetime.  Well deserved winner.