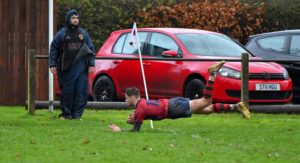 North Mids U20’s 15 v Warwickshire U20’s 14
In their first round of the Jason Leonard Championship, NMU20’s just edged out Warickshire U20’s on a wet and miserable day at Finstall Park!  NMU20’s went down to 13 men early in the game and Warwickshire capitalised on the numerical advantage when their No.8 Hopkins scored which was duly converted by the No.15 Ellis who was himself yellow carded later in the half.  NMU20’s showed some resilient defence whilst down to 13 men and prevented Warwickshire from putting more points on the board.  Our line out was dominant, stealing a number of Warwickshires throw ins and gave a good attacking platform.  On 38 minutes and off the back of a maul,  NMU20’s No.9 Cubitt scored with No.15 Llewellyn converting to see the teams go in 7 points a piece at half time.
After an early unconverted try by Llewellyn in the corner, NMU20’s went 12-7 up but failed to convert their dominance in to points on the board, missing a penalty kick and turning over possession with handling errors.  After 70 minutes, Warwickshire’s No. 9 Collingwood scored which was again converted by Ellis, giving them the lead.  However, NMU20’s lineout dominance gave them some good possession and eventually Warwickshire gave away a penalty with 2 minutes to go which Llewellyn converted.  Considering the conditions, this was a good first performance but there’s plenty to work on ahead of the away fixture at Buckinghamshire on 23rd February. 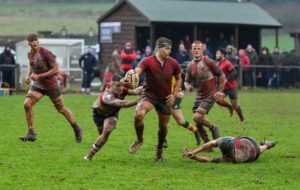 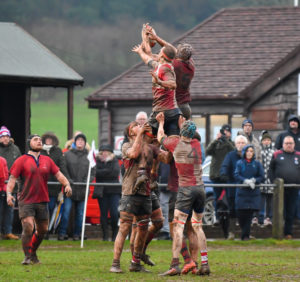