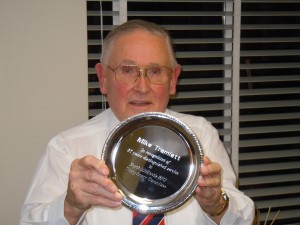 Mike Tremlett, the former Moseley scrum-half and a well-known figure in North Midlands refereeing circles, has passed away after a short illness.

Tremlett was well-known as the representative of the North Midlands Society of Rugby Referees on the county’s disciplinary committee, a role who fulfilled with diligence and good humour for 37 years.

Tremlett stepped down from the role at the end of last season and his outstanding contribution to North Midlands rugby was recognised with a tribute dinner in Bromsgrove which was attended by members of his family and county officials.

After a distinguished playing career Tremlett moved into refereeing where he became a long-serving and much-valued member of the NMSRFR, a society he joined in 1967.

He served the NMSRFR as Appointments Officer and, after retiring from refereeing, he continued to give valuable service as an assessor offering honest but useful advice to many up-and-coming referees.