The Droitwich player and RGS Worcester student won the British title in the Under-17 94kg category at the competition.

Madden, 15, recorded personal bests in the 94kg snatch and the 121kg clean-and-jerk to record another personal best of a combined weight of 217kg.

Madden, who only took up weightlifting to in January 2017 as way of improving his strength for rugby but has made such impressive progress in the sport that he qualified for the British Championships from a competition in Birmingham in November where he lifted a total of 196kg, 24 more than was required to qualify for the event in Luton.

He received his medal wearing his Worcestershire RFU hoodie and should be back on rugby duty with North Midlands Under-16s when they take on Oxfordshire at Kings Norton on February 18.

Madden started playing rugby at RGS four years ago and has demonstrated his versatility by playing number eight for their Under-16 team, flanker for the first XV and wing for the second XV having started his rugby career as a prop. 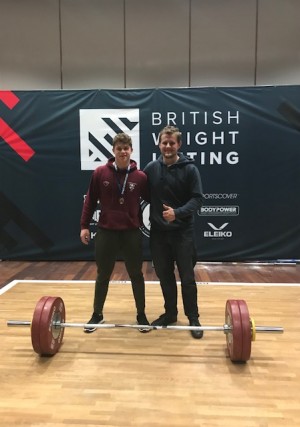