Wednesday 27th November 2019 was quite some day!

The great and the good of the rugby world – both local and national gathered together at Ellesmere College for the inaugural match of the North Midlands Centenary – Schools’ Challenge Cup.

Guests of honour were Old Ellesmerian Sir Bill Beaumont, and the headmaster during his time there, Mr Ian Beer. Sir Bill learned to play rugby while at Ellesmere and went on to become Captain of England, earning 34 caps. He later became Chairman of the Rugby Football Union and is currently Chairman of World Rugby.

The game was played between Ellesmere College and a combined Wrekin College and Abraham Darby School team. Match official was Luke Pearce – hot foot from the World Cup in Japan. Assisting him were 2 North Midlands Young Whistlers – Ashely Simmonds and Patrick Tyrrell, seen below with Luke. 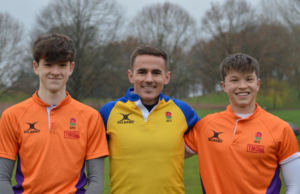 All three schools have long rugby traditions and the game was played in a great spirit. In spite of a determined display by Wrekin / Abraham Darby, Ellesmere ran out as winners 35 – 0

Brendan Wignall, Ellesmere College Headmaster, welcomed the guests to the school saying it was an honour to host the inaugural event as part of North Midlands RFU Centenary Season. 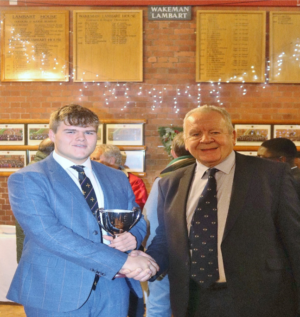 He also spoke of his life in rugby and how the people in the game make it what it is and emphasised that above all the game should be enjoyed.