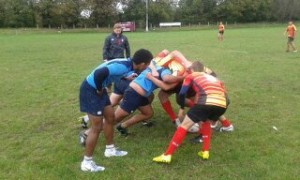 Birmingham Metropolitan College entered two teams along with one each from Bournville College, King Edward’s Sheldon Heath and Park Hall.

This is the third year of the sevens series which has proved an effective way of introducing new players and forging close links between clubs and the colleges.

The next event in the North Midlands FE Colleges Sevens Series will be at Veseyans RFC on November 19.