The first round of the Gill Burns County Championship saw North Midlands face an always strong Lancashire side away at Waterloo RUFC, with the previous result being a very disappointing landslide to the northern side, a very young North Midlands squad travelled in good spirits and high hopes of a great performance.

Following some delays on the M6 that saw kick off pushed back; the travelling side started well and immediately applied pressure on to the Lancashire team. Early scrums saw North Midlands immediately in the ascendency, which very much set the tone in the set piece for the whole contest. An early penalty saw captain Ali Livermore opt for a chance at the posts, which she gamely converted to give the North Midlands an early lead.

Lancashire threatened throughout utilising their strong twelve hitting hard and flat lines making meters in every carry. However the visitors defence was resolute with very few first up tackles missed. The Lancashire eight was strong in the loose and turned over several North Midlands attacks stemming the pressure.

Deep into the first half saw a fantastic break from the North Midlands backline seeing Ellie Beech, Charlotte Daley and Frances Layton combine only to be stopped just short of the try line.

Just before half time Lancashire structured a period of excellent phases and played the offload game expertly through the middle of the pitch. The visitors held strong however the home sides barrage was rewarded when they crashed over for the try, well converted by the Lancashire fly half. This left the half time score at 7-3 but with North Midlands on the front foot.

North Midlands continued the barrage of attack into the second half only to be let down by the final pass on several occasions, the commitment and ambition shown to play the ball was fantastic and almost paid off. The robust defence was uncompromising and Lancashire never looked likely to score again, resulting in the option to kick two penalties, one of which was converted.

In the dying minutes of the game the North Midlands were all over the Lancashire defence resulting in two consecutive yellow cards given to Lancashire within the last five minutes. The visitors continued to attack relentlessly and moved the ball from touchline to touch line to stretch the home sides defence. Finally space opened up on the wing and the lightening feet of Charlotte Daley saw her cross the try line out wide to bring the team within touching distance of the win. A mighty effort at the conversion from Ali Livermore fell just short with only a minute left on the game.

While Lancashire attempted to slow the restart, North Midlands gathered the ball through Chloe Andrews who broke free up the field. The tempo of play remained high and the North Midlands continued their barrage of attack desperate to close the game out positively. Unfortunately Lancashire managed to turn the ball over at the breakdown and kick the ball to touch to receive the final whistle.

While the scoreboard demonstrated a loss, the North Midlands side where by far the better performing team on the day and with one or two last passes finding hands it would have been a clear win. We take massive positives from the strong performance and are hugely encouraged by the display showing where women’s rugby is in the North Midlands.

North Midlands Ladies play their next game against Leicestershire RFU away on Sunday 22nd May in the final contest of the season. 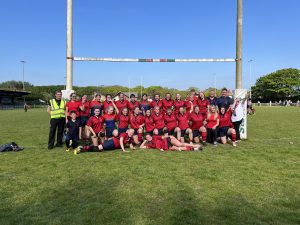