Outstanding voluntary service to rugby clubs in the region has again been recognised in the North Midlands Volunteer Awards.

More than 130 nominations were received across the award categories with presentations made to the winners at recent North Midlands RFU events.

The North Midlands Volunteer Awards are now in their 13th year and recognise the loyal and unstinting work carried out by volunteers across Greater Birmingham, Shropshire and Worcestershire & Herefordshire to keep rugby clubs running smoothly and efficiently.

NMRFU Groundsman Of the Year Andy Harris of Birmingham Exiles 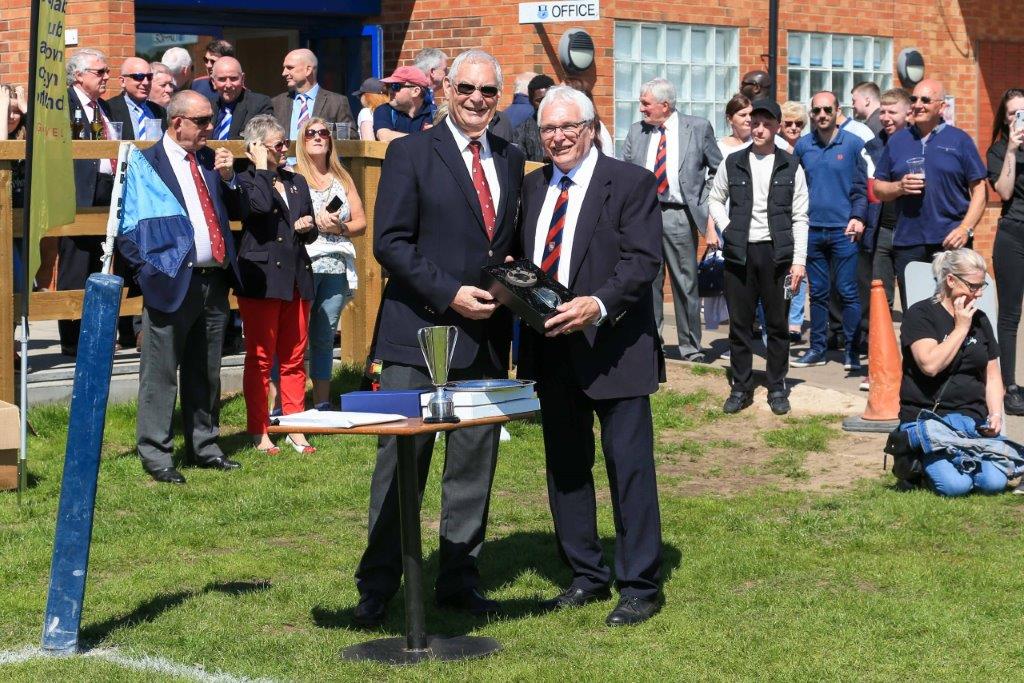 As with all clubs without a Club Groundsman our game would be a lot poorer sport and Andy is one of many who spends a great number of hours nurturing the pitches at Old Damson Lane, Elmdon.  He has taken fully on board the advice given by Keith Kent (RFU Head Groundsman) and can be found at the Club every week in all sorts of weather doing some work whether that be cutting the pitches and marking them out, treating and feeding the grounds or keeping the whole site looking tidy.  The pitches are in demand outside of the matches played by Birmingham Exiles and the club has hosted Greater Birmingham training sessions and matches and also the County Women’s match in the Gill Burs Women’s County Championship match against Lancashire on 28th April where Gill Burns herself was present and commented upon how good the grounds looked.  Andy is a tremendous servant of Birmingham Exiles and a very worthy winner. 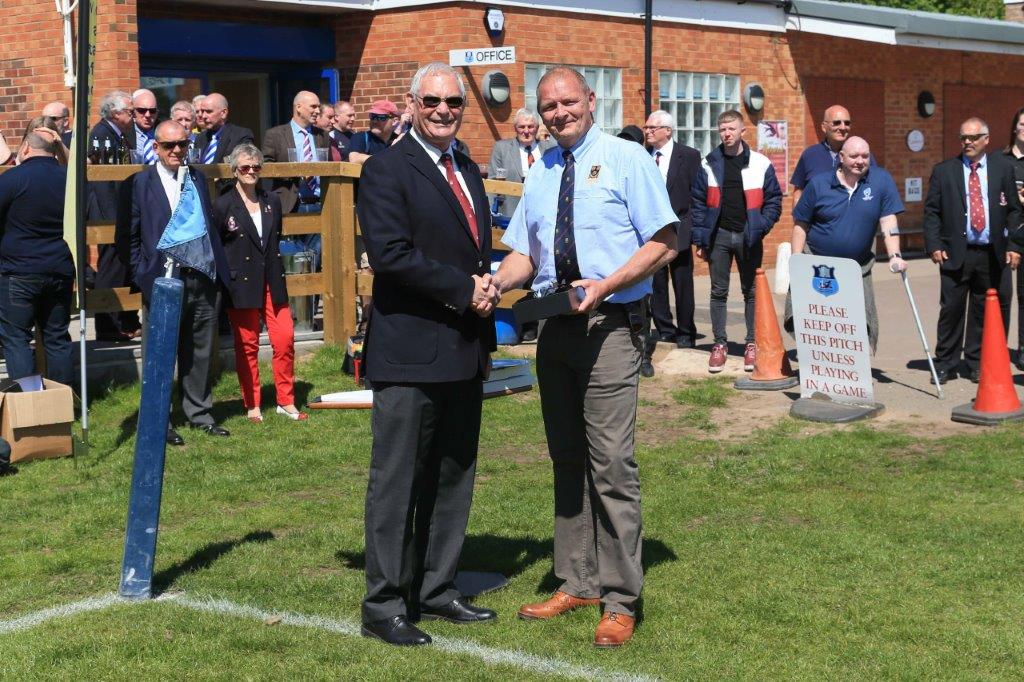 Giles has been Secretary at the Club for a number of years and on top of that is also membership secretary – 2 of the challenging jobs in any club.  He is very “hands on” at the club helping out wherever needed and has been seen serving behind the bar at times when bar staff are busy or even collecting glasses, washing them and then drying then ready to be filled with drinks again, without having to be asked.  Giles represents his club at Shropshire DU and NMRFU meetings and is currently Vice President for Shropshire RFU.  Is very focussed on his club and his energy is infectious – a great supporter of Shrewsbury RUFC and he is delighted in the 1st XV gaining promotion to Level 7 having won all 22 league fixtures. 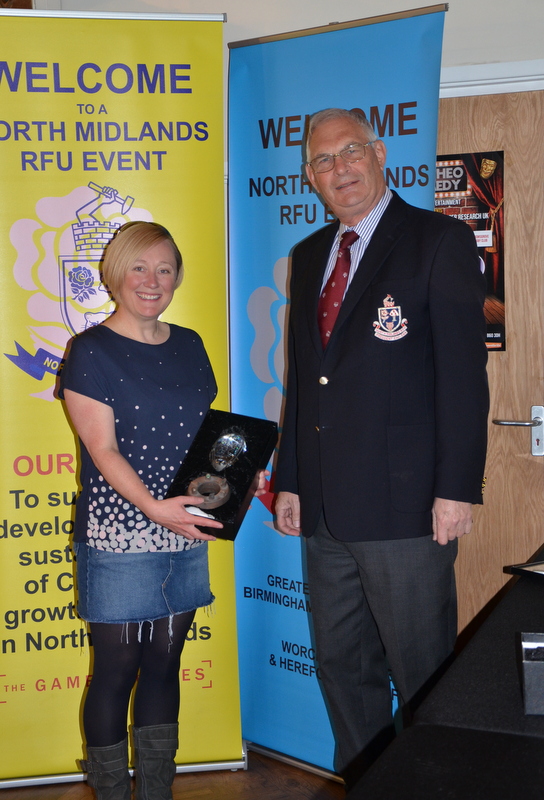 When Club President, Dave Wellington, heard about the recognition award he told me “The award could not have gone to a better or more committed volunteer”  Clare is 1st XV Manager at Bromsgrove RFC but this is only her “elected” role.  Clare is the person the club go to in order to get jobs done and she does what most clubs would have 3 volunteers covering and does this without seeking the limelight.   As well as volunteering at Bromsgrove she also helps out with NMRFU where we have benefitted from her energy and commitment.  A worthy winner of Club of the Year Award. 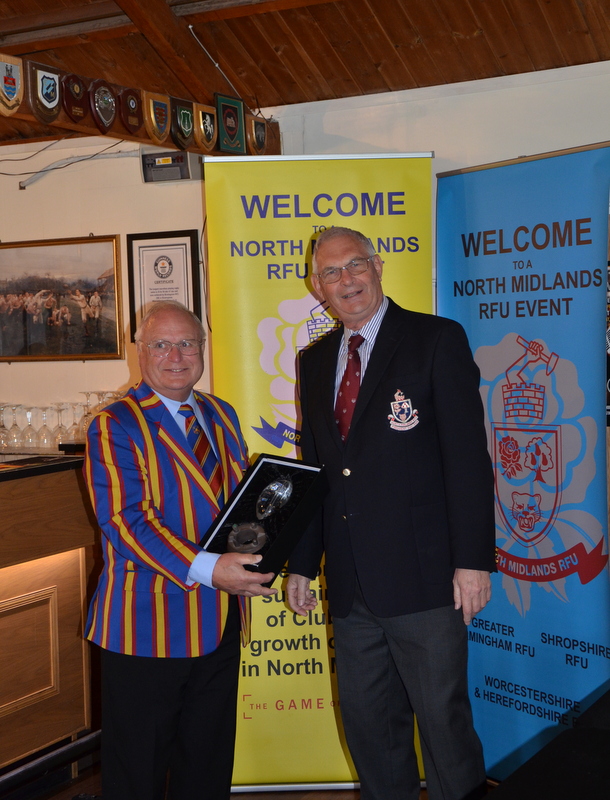 Tim enjoyed his social rugby as well as helping introduce (or Transition in modern language) Junior and Colt players into the wonderful world of senior rugby.  I have it on good authority that Tim (a Prop) and Derek Hill (Hooker) were the experienced pair in a side where the youth of Old Halesonians were introduced and the combined age of Tim and Derek was not far off the combined age of some opposition packs.  So Tim was a player, a Team Manager and Coach of youth and Colts sides and did those key tasks of:

Most importantly taught them to enjoy the game

Got young players involved in the game

Having hung up the rugby boots Tim is still very involved at Old Halesonians RFC off the pitch as well as supporting the players on the pitch.  Tim is Club Secretary and represents his club at both Worcester & Hereford RFU and NMRFU meetings where anything he says is carefully listened to.  Tim has been involved with Rugby (and Old Halesonians RFC) for over 40 years and always has a smile on his face and warmly greets visitors to the Club.  A tremendous ambassador for the game of Rugby.