TWO members of the Old Saltleians club in Birmingham have returned from a trip to India where they coached Tag rugby to local youngsters.

Gez Mandell and Colin Gardner have made previous visits to India with the Tag Rugby Trust but this year made an independent visit to Bhubeneshwar to help in a local coaching initiative.

Mandell and Gardner coached Tag rugby, a popular non-contact version of the sport, to Year Seven and Eight boys and girls in six local schools.

Around 250 youngsters benefited from coaching from the Birmingham pair over an eight day period even though facilities were often basic with the smallest playing area being 10 metres square.

“Playing areas were dirt and dust with not a blade of grass in sight,” said Gardner.

“But the one key element of the session was enjoyment and we were always asked when we were coming back.

“We were able to leave behind some equipment supplied by Tag Rugby Trust to ensure continuity.” 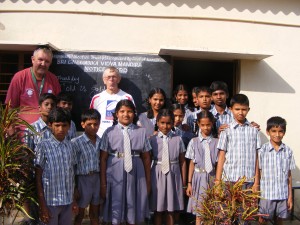