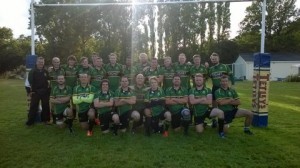 Old Yardleians will stage their annual Moss Goode 15 a side tournament at Tilehouse Lane on SaturdayAugust 23.This popular event is seen by many local clubs as the curtain-raiser to the season as it offers their squad members an early opportunity to impress their coaches.The tournament is dedicated to the memory of Moss Goode, a servant of the club as a player and a long serving and totally committed club, Greater Birmingham and North Midlands administrator.This year’s Tournament sees Tamworth, who were Shield winners last year, returning to defend their crown along with Berkswell & Balsall, Bridgnorth, Willenhall, Birmingham Exiles, Moseley Oak, Ashby, Vipers and the host club.The teams are split into leagues playing games of 10 minutes each way then progressing to semi-finals and finals of the Shield and Plate.The day is well supported by the North Midlands Society of Rugby Football Referees who supply a number of officials to run the games.