Redditch’s Emily is Young Volunteer of the Year

Emily Shotbolt of Redditch is the RFU Young Rugby Ambassador Volunteer of the Year.
Shotbolt was presented with her award by England captain Dylan Hartley at a ceremony at Twickenham at the England v Barbarians match.
Her voluntary work at Redditch has included a wide range of activities including organising summer camps and acting as first aider to the first XV.
The RFU award is the latest recognition for Shotbolt who recently won Redditch’s Andy Carr Award, which recognises outstanding voluntary service to the club, and the North Midlands Young Volunteer of the Year Award.
Shotbolt is also an active member of the RFU Young Rugby Ambassador scheme and was selected from other candidates across the country for the prestigious national award. 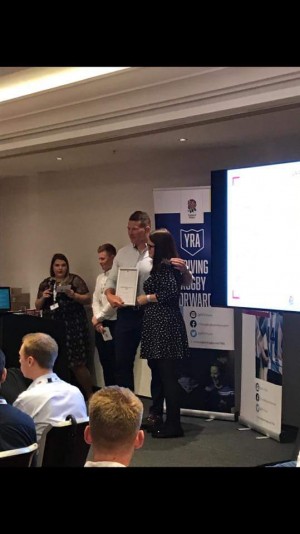