The North Midlands Society of Rugby Football Referees (NMSRFR) have been providing referees to Greater Birmingham, Herefordshire, Shropshire and Worcestershire since 1920. They are also federated to the Staffordshire society and regularly send members out on exchange to other parts of the country.

The Society welcomes potential new members of all genders and ages (from 14 upwards) at any time. If you are interested in becoming a referee, please click here to access the ‘Become a referee page’ on the NMSRFR – Become a referee

If you need a referee for a match, please get in touch with us using this link https://northmidsrefs.co.uk/need-a-referee/

Please use this link to contact NMSRFR if you require any further information.

I started refereeing, like many because I became fed up with getting hurt. From a very gentle start with the Society I started getting more opportunities and was fortunate enough to get to what we now call the National Panel. Twelve years spent refereeing and AR’ing on the Panel before I hung my boots up and started coaching which I do to this day (and really enjoy it). Third time on the Board, a couple of years as Secretary, a break until 2014 when I became Grading Director and now in my new role as Chair.

I have been involved in rugby in one form or another since the age of 15 when I initially started playing at Telford then joining Shrewsbury Colts in 1969, before moving to the south of the region and to Cheltenham and finishing my playing days after 21 years at Evesham. Wishing to remain involved in the game I turned to refereeing and had 15 enjoyable years before a serious injury struck. I took on the role of Society Treasurer some twenty five years ago and have subsequently been involved in the many changes that have taken place and watched with interest as its evolved into the flourishing organisation it is now. Ten years ago I became part of the coaching team at The Royal Grammar School Worcester and have recently taken up a role on the Rugby Football Union of Referees Finance Committee

After playing rugby for 22 years I had to stop with shoulder injury and started refereeing at the age of 33 which I am lucky to still be able to do most weekends. I have served on the old committee as an ordinary member and as Chairman in the past and in the past two years on the board as Recruitment and Retention Director. Rugby has been and still is the game of my life and I feel by refereeing I can help many more enjoy the sport.

Being rather old fashioned I have always played two sports (Cricket & Rugby) which as the seasons overlap meant that my weekends were used usefully all year round.

Having spent many years in the front row I joined the society in 1989 after some experience as a club referee and for the very first time I read the Laws – what a shock that was as I discovered that the refs had got it right all the years of my playing career and not me. As with all good hookers I ignored the past and got stuck into becoming the greatest ref the world had ever seen – another shock as my understanding grew. I was roped into becoming Sunday Appointments Officer and continued my development as one of the donkeys rather than as a thoroughbred of the refereeing world. Despite this I did well over a thousand games for the society before I stopped counting.

Injury & business opportunities overseas (a weird mix of Germany & Nigeria) meant that I was unable to continue serving the society but maintained a keen interest in all aspects from a distance. Now back in the UK permanently I am delighted to be able to get involved again and to help NMSRFR celebrate its centenary in 2020 and to assist in the development of the Society to meet the challenges of the 21st century.

I started refereeing in 1981 having sustained a head injury playing for Warley RFC.  I am an active referee for Saturday and Wednesday fixtures.  I was a trainer on NMSRFR courses for new referees until this function was taken over by the RFU.  I live in South Shropshire and I am a Vice-President of Bishops Castle and Onny Valley RFC

I joined referees society 1974/75 season having retired from playing at Pershore RFC.. I was active until 2002 (28 years) as a referee reaching the dizzy heights of B2, (about level 6 nowadays). Injury forced my retirement so I became a watcher until 2012. I have been president and chairman (3years) of our society. I have been Chairman of Pershore RFC for 3 years, President, Worcestershire and Herefordshire RFU (2years), President of North Midlands RFU (2years), chair of rugby for Worcestershire and Herefordshire (7years). Currently I’m in my 7th year as council member for North Midlands RFU representing the 60 clubs. 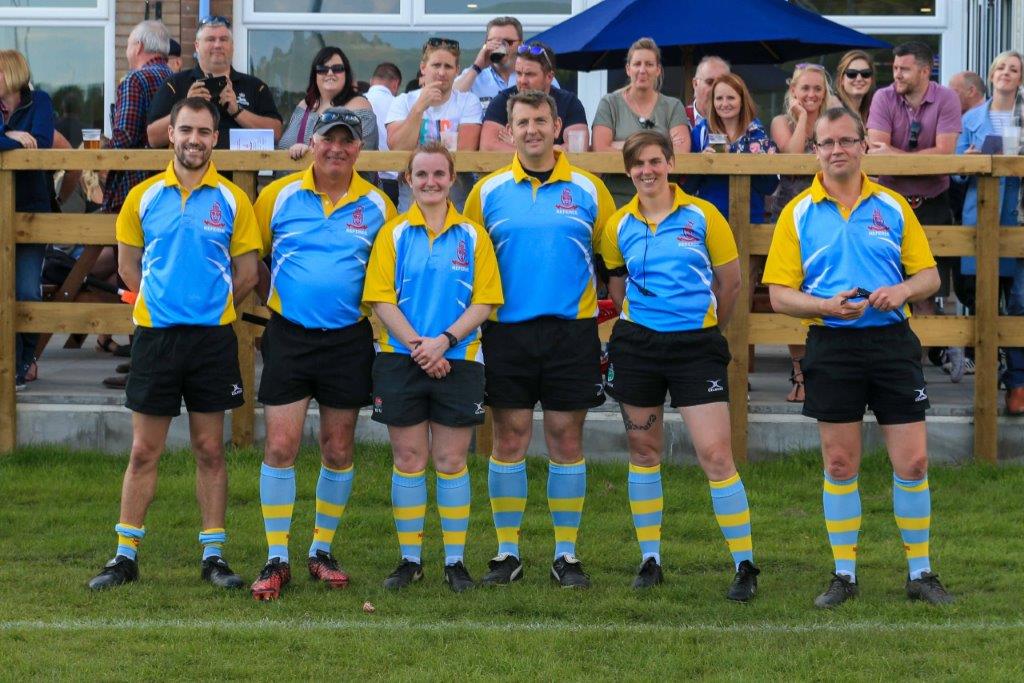