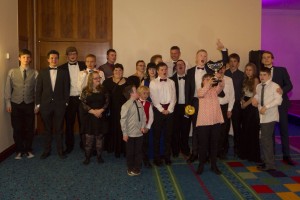 Tim Stimpson, the former England and Leicester Tigers full-back, was guest of honour at the Shropshire Rebels Tag Rugby Club’s Awards night at the Park Hotel in Telford.

The Shropshire Rebels were set up in 2006 as a joint initiative with Telford Hornets RFC and the Wooden Spoon charity, who offered financial support in 2010, to provide a sporting opportunity for young people aged between eight and 18 with moderate or severe learning difficulties.

Stimpson, an ambassador for Wooden Spoon, helped to recognise a year of outstanding achievement for the Shropshire Rebels by presenting three main awards.

The Coaches’ award was made to Harry Cope for demonstrating growing maturity with his team-mates.

Katie Hinton’s consistent improvement was recognised with the Player of the Year Award and Emily Clarke was the Most Improved Player for her hard work during the year.

Past coaches of the Shropshire Rebels include Kieran Spencer, who is now the RFU Rugby Development for Hampshire, who attended the awards evening with his fiancée Rebecca Morgan, the RFU Judicial Secretary.

Next year Shropshire Rebels will host the UK Tag Rugby Tournament, sponsored by Wooden Spoom, at Telford Hornets’ Town Park ground. Teams from England, Scotland, Ireland and Wales will compete in the tournament which will be part of the 2015 Rugby World Cup celebrations.