Street goes back to first club 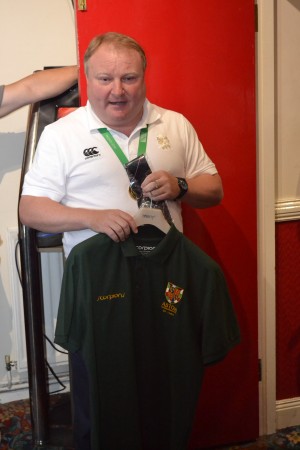 Gary Street, coach of England’s Women’s Rugby World Cup winning side made a triumphant return to his first club Aston OE.
Street played for Aston OE as a scrum-half and played county rugby for Greater Birmingham and North Midlands. He began coaching with the Birmingham University Women’s team in 1993 and then joined the RFU to run a pilot women’s academy in Bath.
He was appointed head coach in 2007 and has since formed a successful coaching team with Graham Smith, the former Scotland A and Moseley prop.
After suffering the disappointment of defeat by New Zealand in the 2010 World Cup final at The Stoop England landed their first world title in 20 years when they beat Canada in the final at the Stade Jean Bouin in Paris.
A week later Street was back in the familiar surroundings of Aston’s Sunnybank Avenue clubhouse where he met up with old friends and celebrated the World Cup win.
Aston OE  presented Street with a club shirt and tie to mark their 125th anniversary season and made him the 19th Life Vice President of the club..
Aug 28, 2014nmrfueditor
7 years ago News
North Mids RFU