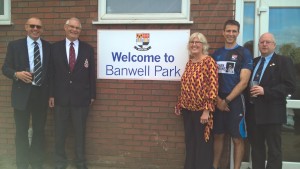 Banwell collapsed and died while putting out the flags on the pitch at Upton’s Old Street ground before a match against Evesham in January.

He was a founder member of the club and remained fixture secretary while serving North Midlands as competitions chairman then President.

Upton have now renamed their ground Banwell Park in his memory and the official renaming will be completed with the unveiling of a plaque by his widow, Jane, on September 23.

The renaming of the ground has been approved by Upton Town Council who own the two pitches.

“Nigel was a very well-liked and respected member of our community and he worked so hard for the sport he loved,” said Cllr Betty Williams chairman of the council’s open spaces committee.

“I am pleased that he will be remembered in such an appropriate way.”