Presentation of cheque to My Name’5 Doddie Foundation

The Centenary sub-committee were able to arrange a meeting with the CEO of My Name’5 Doddie Foundation, Jill Douglas, after the recent easing of Covid-19 restrictions in order to present the Centenary Charity with a cheque.

collection tins for loose change on the bar, raffles, auctions, a few versions of Heads and Tails, and dinners with a range of international rugby players.  The enthusiasm of those involved has been most heartening and demonstrates the true spirit within the community clubs in the County.

When NMRFU informed the Foundation how much had been raised, Jill Douglas, responded:

“It has been a great pleasure to work with Steve Guy, Keith Skirving and the team at North Midlands RFU over the last eighteen months and we greatly appreciate all their hard work, boundless energy and support.

They delivered a fantastic and well thought out series of events and fundraising initiatives which not only raised significant funds for the Foundation, but also improved awareness around motor neuron disease. We have a vision of a world free of MND and continue to invest in MND research projects while also supporting people living with this devastating diagnosis, this is only possible through your support. It was a great shame that COVID restrictions impacted on the North Midlands RFU Centenary and we look forward to celebrating their history and wonderful fundraising achievements when allowed.

The rugby family has been so incredibly supportive since we launched the Foundation three years ago and Keith and the team at North & Midlands have demonstrated what is possible with a well planned and executed plan of action.”

Chairman of NMRFU Charity (Keith Skirving) commented “that as important as raising money, it was equally important to spread the awareness of MND not only throughout North Midlands clubs but also to the wider community within the counties that make up our CB. I am delighted to have led this project, which has been the highlight of my work within NMRFU“

Many thanks to all the clubs that participated – we have helped to make a difference in combating this awful disease. 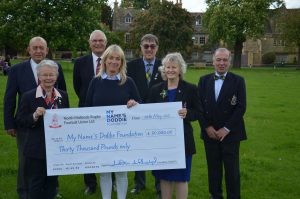